Getting customers to care about social issues

How do social ventures maintain integrity? During the roughly two months I’ve been in India, I’ve had a lot of time to consider this question and my encounters with social ventures and various people from the Corporate Social Responsibility (CSR) sector of commercial sectors have helped me refine many of my own ideas about entrepreneurship. Now that my experience in India has come to an end and I can step back, I’m able to see the situation with a little perspective and two challenges stand out in particular as threats to social ventures trying to maintain integrity: compensating employees and consultants who work for the organization and getting regular consumers to care. Both challenges have their roots in maze of social, cultural and historical forces so I will express my views in two separate posts. In this post, I’ll share my experiences on the second challenge since it has been on my mind rather frequently since I arrived back in Boston last Saturday.

The challenge of getting regular consumers to care has a lot to do with consumer culture. Now that I’m back in the States, I’m starting to appreciate the contrast between consumer cultures in India and the United States. During the roughly two months I spent in India, I was able to visit and meet the founders or managers of several social ventures, many not-for-profits and some for-profits as well. In the US, it has become commonplace for firms to improve their branding by tying their products or services with a social cause. This winds up in what philosopher Slavoj Zizek describes as a guilt-ridden consumer culture wherein with every purchase we simultaneously commit the crime of capitalist consumption and buy our forgiveness for doing so. Examples abound and Zizek isn’t hesitant to point some of them out: Ethos water at starbucks, Tom’s Shoes, etc. In the US, compassion and charity have almost become commodities you can purchase readily.

The same culture of ethical consumerism does not seem to apply in India. In Bangalore at least, it has not yet become fashionable to shop in places where portions of the firm’s proceeds are donated to help alleviate social injustices in the same way that it’s become fashionable here. There is undoubtedly a multitude of socio-cultural, historical and economic forces at play that contribute to this and I’m certainly in no position to explore all of them beyond offering my own observations. The average middle income Indian (in whatever sense it’s possible to speak of a middle income given the large income inequalities) can’t walk down a street without homeless or impoverished men, women and children begging for money. It can be just as difficult to take an auto without being bombarded whenever the driver has to stop for traffic or wait for a green light. It’s such a common experience for Indians that almost none of the ones I met batted an eyelash. This was not the case for either me or my classmates and pretty much every foreigner we encountered and it was more than a little difficult to ignore a dirty, shabbily-dressed child or mother begging for money on the streets. The same situation is true in many parts of Tanzania, but my time in the States has seemingly dulled my ability to ignore such encounters.

This is of course only one example, but I can’t help think that it says a lot about the prospects for a successful for-profit social venture in India. During our time in Bangalore, we had the pleasure or meeting with the founder of a retail store whose mission included creating economic opportunities for rural artisans and crafts people. The store we visited, Mother Earth, was an expansive, well furnished and upscale furniture and home goods store. Indeed it was the closest thing I have yet to see of an Indian Crate & Barrel. The founder we met with and who showed us around the store told us about how well the store was doing, how profitable it had become and how quickly it had grown in just the last few years. It was quite impressive, but the founder was quite clear about the fact that this success was built in large part on marketing Mother Earth as a retail brand, not as a social venture. Many of us were surprised to hear this and pushed her to explain the marketing choice, believing then that the organization could market itself as a social venture and still achieve financial success. In fact, if Mother Earth were to emphasize this dimension, it might be able to appeal to a set of consumers who were more likely to return specifically because of the social dimension. After all, consumers care about helping the broader social environment, right? 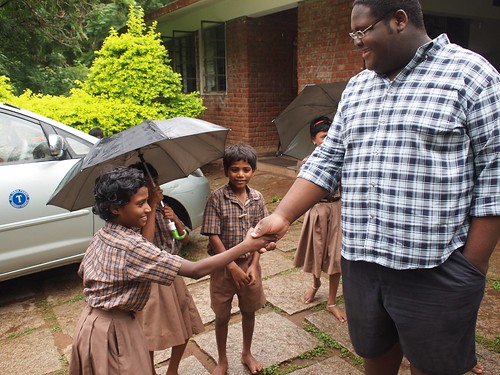 By the time a month had passed, this perspective had already started to look overly-optimistic and overly-simplistic, at least in my mind. I don’t know nearly enough about Indian culture and history to offer any explanation for the difference in consumer culture, but after the exposure I’ve had to India’s social sector, I have some sense for the difficulties a for-profit social venture faces in maintaining integrity. How does one manage the different responsibilities associated with the bottom-line and the double-bottom-line? If it’s potentially dangerous (revenue-losing) to market the social dimensions of the firm now, when will it be “safe” to do so? How does one manage the expectations of owners and shareholders who might only be there for the for-profit side? How can one ensure that the complex financial benefits (pensions, stock options, etc) earned from the for-profit activity actually reach and improve the lives of the people behind the social mission? How does one manage the risk of mission drift as the venture scales? None of these questions come with easy answers and some are as valid for non-profits as well.

I don’t mean to imply that Indians do not care about being socially responsible or ethical. In some sectors, it’s quite the opposite. For instance, India has a large percentage of firms who practice CSR. In fact, CSR is a fast growing specialty in the Indian business sector and firms all over the country are developing their own tools for making a positive social impact on the world around them.

There are likely some deeper conclusions to draw here. Perhaps one could take it as a sobering reminder of the many ways in which we shelter and protect ourselves from the grisly face of poverty; we don’t even need to interact with it anymore to help combat it. Rather it’s simple enough to buy Starbucks coffee or Tom’s shoes and know that we’ve contributed in our own way. More likely, I think it’s too early to really make sense of this contrasts as India is a country in the midst of serious and far reaching social change. The social and economic changes heralded by the country’s rapid growth have presented Indian’s across almost all classes and castes hitherto unknown economic opportunities, aspirations and realities. What I may now be mistaking for a consumer culture of apathy may be the manifestation of an aspect of Indian culture that I’m not grasping.

1 Response to Getting customers to care about social issues