The Long tail of Social Enterprise

Clay Shirky’s 2005 TED Talk on the nature of collaborative networks online was eerily prescient. Suggesting that tightly-integrated and professional organisations would give way to systems where the “forces are general and the results specific”, Shirky shares credit with Wired editor Chris Anderson for popularising the phenomenon known as “the long tail”. Rather than teeming masses producing and consuming more or less equally, individuals contribute and consume along a normal curve.

Shirky used Flickr as an example: while the small, “professional” class of photographers might be responsible for the majority of photos taken, a full fifth of the remaining photos were taken by infrequent amateurs. Typically, this professional class—the “head” of the curve—organizes itself into institutions, excluding less productive individuals. However, online communities eschew institutionalisation in favour of collaboration and a sort of productive chaos—forming the long tail Shirky and Anderson describe.

But how does this relate to GSE and social entrepreneurship as a whole? Surprisingly well.

At Sattva Media & Consulting, my partner Varun and I developed a database of investments in Indian social enterprises. Based on this research, it seems vast majority of investments made into social businesses have been in microfinance institutions (MFI’s). 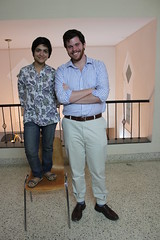 The story of MFI’s is an interesting one: Muhammad Yunus, an economics professor, realised that very small loans could have disproportionately large effects on the lives of those in poverty—rather than the loans traditionally given by banks to make large improvements in infrastructure or business, microloans would enable the long tail to incrementally improve their own standards of living. The result of Yunus’ efforts—the Grameen Bank—functions as the template for microfinancial institutions to this day.

While MFI’s flourished for some time, the problems with the model became apparent. The drive for profit led to improper or illegal action on the part of loan officers and debtors, and MFI’s fell somewhat out of favour. All the other sorts of social enterprise became the logical alternative, but when compared to MFI’s, they were diminutive and could not boast the same rates of return on investment. However, impact investors address this problem. Firms such as Acumen Fund find and assist social enterprises with investment capital, organisational support, and other resources—facilitating the sort of results that were expected from the much-touted microfinance industry.

The social enterprise sector is far from perfect. However, impact investors and their clients demonstrate the spread of socially-minded action across the long tail. Where thoroughly institutionalised charity and welfare existed at the head, and random acts of kindness and decency along the tail, a chain of intermediaries now exists. From wealthy investors seeking returns to aspiring entrepreneurs willing to better their communities, there are seemingly “sweet spots” set for certain mixes of institutionalisation and collaboration.

Clay Shirky was right in saying that institutions are fundamentally concerned with their own preservation. That doesn’t have to be a bad thing. Engaging the long tail of the disenfranchised and marginalised while remaining willing and able to adjust one’s position relative to them is the toward a more sustainable, effective, and egalitarian path of development.